Is Quinoa Good For You?

Research into quinoa has grown tremendously since it reached peak popularity in 2014. This was mainly due to its huge range of health benefits and nutritious nature.

These days, the quinoa hype shows no signs of dying down. More than ever, our supermarket shelves are packed with quinoa ‘alternatives’ to our favorite foods to satisfy the quinoa lovers of the world. But what is exactly is it and what does it do?

You may have seen quinoa popping up on your favorite cooking shows, being included in those best-selling recipe books, or even being praised by dieticians all over the world as an invaluable ingredient that should be included in everyone’s diets, even babies.

It’s such a popular food source that 2013 was actually declared the ‘International year of Quinoa’ by the United Nations – yes, this really did happen!

The mighty grains contain a high nutritional content, making quinoa a perfect choice for those simply wanting a healthier lifestyle as well as vegans, vegetarians, and also those who are gluten intolerant.

Quinoa has also been considered a preventative for certain types of cancer, due to its high fiber levels. It’s also an incredible source of several minerals including, phosphorus, copper, iron, folate, magnesium, manganese, and zinc, all of which should be included in our daily meals.

With high praise from consumers, dieticians, scientists, and chefs, this superfood is considered one of the healthiest and most nutritious foods on the planet.

Although quinoa is widely thought of as a whole grain, botanically speaking, it is not a grain but a seed and comes from a weed-like plant called ‘Goosefoot’.

It can, however, also be classified as a ‘pseudograin’ due to it being similar in nutrients and eaten the same way as cereal grains.

It was first grown for food around 7,000 years ago and has been a staple in the diet of people living in the Andes for thousands of years. Labeled as ‘the mother of all grains’ by the Incas, they believed that it was a sacred food.

It is perfect for those with celiac disease, wheat allergies, or for those simply avoiding gluten and is often considered a healthier substitute for white rice and pasta.

Containing all nine essential amino acids, this gluten-free whole-grain carbohydrate qualifies as a whole protein. For those following a plant-based diet, this is great news as the hunt for ways of including nonanimal proteins into your diet just got easier.

With over 3,000 types of quinoa, the most popular customer choices are red, white, and black. The grains are incredibly nutritious and are packed with vitamins and minerals, and contain more protein, fiber, and healthy fats than the majority of other grains.

With the quinoa trend ever-growing, a variety of quinoa adaptations can now be found on shelves.

These include quinoa flakes, which are steamed quinoa rolled into thin, near-transparent flakes and make a wonderful oatmeal substitute, quinoa flour for alternative baking, and also for the quinoa obsessed, you can now buy quinoa chips, quinoa pasta, and even quinoa chocolate.

All of the varieties of quinoa are very high in antioxidants and protect your body from free radicals. In some cases, it has also been shown to lower the risk of type 2 diabetes and help with blood sugar control.

Living up to its ‘superfood’ status, it can even help lower cholesterol and in some cases help reduce inflammation. It seems there really is no end to the health benefits of quinoa.

How Do You Prepare Quinoa? 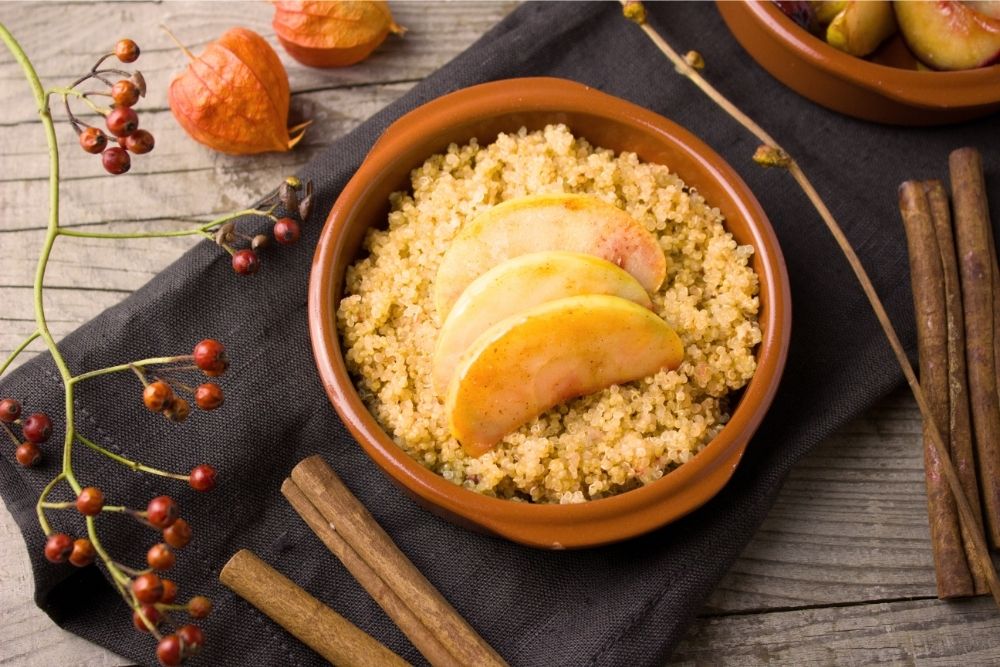 Preparing quinoa is much like how you would prepare rice or barley; two parts liquid to one part quinoa. However, you should always rinse quinoa before cooking as the outer layer, called ‘saponin’, can sometimes cause a bitter taste and has even been reported to cause stomach irritation in very rare cases.

For your liquid, you can simply cover the quinoa with seasoned water, or to add even more flavor to your meal, you can use stock or vegetable broth.

Leaving the pot uncovered, you should bring the water to a boil, then add the lid and reduce the heat, allowing it to simmer for about 15 minutes or until the grains are soft.

A handy tip when trying to work out if the quinoa is cooked is to check for the tiny spiral of the germ which will appear in the grain when it’s ready.

Once you’ve drained the cooked quinoa, allow it to rest in the pot for a further 5-10 minutes and fluff it up with a fork, just as you would with couscous.

Quinoa often works quite nicely on its own or, as it absorbs any sauce or dressing that it is placed with, it is often a good substitute for rice. It’s great when added to soups as it helps to thicken them out or you can also use it to bulk out a salad dish and help give it more of a crunchy texture.

With its nutty flavor, it can be used in both savory and sweet dishes and it is versatile enough to be eaten at either breakfast, lunch, or dinner, or even all three if you just can’t get enough of it.

You can also refrigerate and even freeze quinoa, which is great if you like to prepare dishes ahead of time or have a portion of nutrients ready to be added to any dish.

Quinoa flour is also another great form to cook and bake with and can be used in your favorite recipes to replace regular flour. It’s especially great for baking gluten-free bread as the protein in quinoa flour helps to give your bread structure and improve the overall texture.

How Do You Pronounce Quinoa?

If you find yourself struggling to pronounce the word quinoa then rest assured you’re not alone. There has been a lot of mispronunciation with this word and it seems to have been called everything from ‘QWIN-OH-AH’ to ‘QUEUE-IN-NOAH’.

The correct way to pronounce it is much easier and once you’ve learned it, you can shout it with confidence and pride in your local supermarket aisles.

The correct way to pronounce the word is ‘QEEN-wah’. It’s as simple as that!